Sheldon Adelson, the founder of the Las Vegas Sands Corporation. The company that gave us the Venetian and Palazzo Resorts.  The company also gave Las Vegas tourism an extra boost with the creation of the Sands Convention Center. Putting seven thousand suites in the hotels with two million square feet of modern convention and meeting space on the Las Vegas Strip. We like that!

He was one of only two Americans (the other one was Steve Wynn) to receive a license from the Chinese government to open up casinos in Macau, China. That boosted our international tourism to record numbers.  That visionary leader, Sheldon G. Adelson, passed away last night at the age of 87 from complications related to treatment for non-Hodgkin’s Lymphoma.

When I tell my tour guests who this man is/was, I always explain that he is a true “only in America” success story.  As he explained in an editorial posted in the Boulder City Review: “I’ve often said the story of my career would be a true rags-to-riches story, except for the fact that my parents couldn’t even afford the rags.” – He was not joking.

Like other American success stories, he started life with no advantages except some loving parents who instilled in him the need to help others even when you need help yourself.  He had to leave school early in order to earn a living to help the family survive. Yet he ended up building a corporation that employs thousands of people around the world. And never forget the people who helped him out along the way. 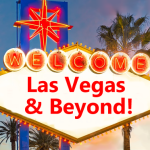 Las Vegas in Pictures at Night from the Air